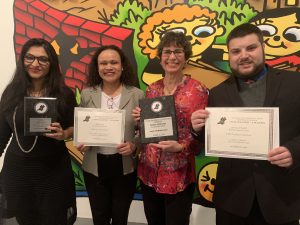 LTC’s Community Producer Soumita Acharya won first place in the Event Coverage-Multiple Cameras category for her coverage of the 2018 Lowell Kinetic Sculpture Race. Covering this “Triathlon of the Art World” had cameras following human-powered, all-terrain sculptures riding over cobblestones, through a mud pit, and navigating the Merrimack River.

The awards were presented at the ACM-NE Nor’easter Video Awards Ceremony in Portland, Maine on October 31, 2019. Pictured with the four awards in the photo above are Soumita Acharya, Nancy Peña, Wendy Blom, and Matt Nelson.

LTC’s programming airs on Channels 8, 95, and 99, streams live and is available on demand from its website LTC.org, Youtube, and Facebook. LTC can also be found on Roku. Search for “LTC Lowell” and subscribe for free.