Stop by and say hello to two folks who are joining the LTC staff. Access Programming Coordinator Caroline Gallagher is learning the ropes of programming Channels 8 and 95 from Dan Toomey. Caroline grew up in Lowell and moved back after many years away working in commercial TV, IT, and video production. She has quite an impressive resume and videography skills. Happily, we are not losing Dan, who will continue at LTC part-time as Special Projects Manager.

Brian Dorrington will join the team as Director of Municipal Programming on April 11. Brian is a Lowell resident and graduate of Emerson College. He is coming from Bedford Access TV where he and one colleague did just about everything to make that award-winning station run. Brian will be producing programs, covering meetings, and managing Channel 99. He will be working with Geoff Klane, Municipal Producer. In the restructuring, Soumita Acharya, former Municipal Producer, will become LTCs part time Access Producer. She will assist non-profits with production, create new series programs on the arts, and promote LTC in the community. 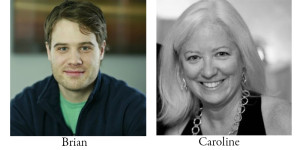